The upside to having a broken leg is that I’ve got a lot of time to research how to spend our days while we’re in New England.  The downside is that means I spend an awful lot of time reading internet reviews. And what I’ve come to realize in doing so is that people on the internet are really freaken nuts.

In fact, I feel reasonably confident that I could build an entire website dedicated to mocking ridiculous people on the web and it would be a huge success.  And I might do that at some point. But for the time being, let’s discuss Yelp, shall we?

The neat thing about absurd reviews on Yelp is they can generally be divided into distinct subgroups.  Let’s take a look at some of the most popular ones.

The “I Forgot What Type Of Place This Was” Review

Being that we’re in New England, we decided to find some good seafood.  In perusing a local seafood shack’s reviews, I noticed this gem:

The “Misplaced Anger / I Forgot to Take My Meds” Review

Arnold’s is a famous lobster shack out on Cape Cod that we visited about a year and a half ago. We loved it – it was the quintessential New England roadside seafood joint. Tons of food, tons of people, tons of good times. I was considering planning another road trip out there and decided to make sure the reviews were still good.  That’s when I ran into this doozy: 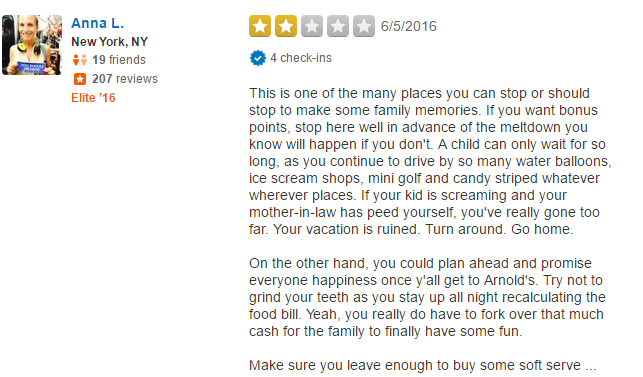 Look, I get it. You had a bad day.  Nothing went right. Everything is annoying. People are stupid. It’s exhausting. In a moment of weakness, you fire up Yelp and unleash your anger on the poor, unsuspecting business that just happened to be the place where everything came to a head. You rant, you rail, you complain about random stuff that has nothing to do with the business, and then, when your blood pressure has finally hit its very peak, you angrily hit “submit.” It happens to the best of us.  The difference is, when we wake up the next morning and realize we were being a little cray cray, we take that shit down.

The “Wow, There Are So Many People Here, This Place Sucks!” Review

I often wonder if restaurant owners reading their Yelp reviews think: “Be careful what you wish for, cuz you just might get it…”  You work hard, you perfect your recipes, you buy the best ingredients, you hire reliable, respectful, customer-oriented, staff members, and you hope and pray that when all is said and done, you eke out a little profit for yourself. But just when all your efforts are being rewarded by a constant stream of people at your front door, some yahoo comes along and gives you a bad review because there are too many people in your restaurant. 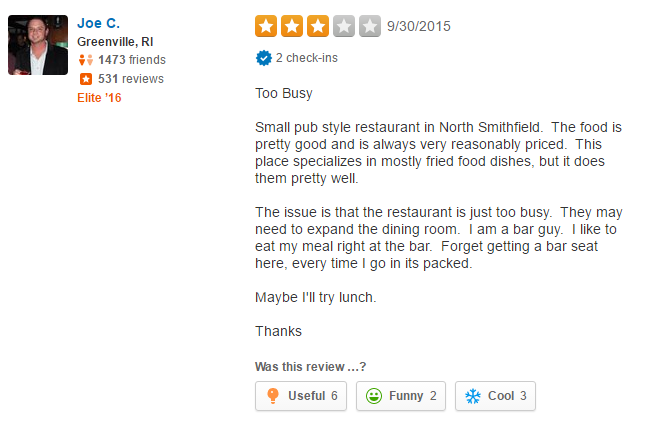 Perhaps Joe and BostonBestEats can go have dinner with each other at some quiet, mountaintop monastery, far away from the masses. I’ve heard Mongolia is nice. Or maybe someone could develop some sort of ‘early warning system’ to alert them when busloads of retirees are out prowling around, looking for “food” and “sustenance” and whatever else those troublemakers do. Or perhaps Joe and Boston could build their own roadside seafood shack that isn’t so… close…. to… the… road???

Better yet: Maybe they should just stay home and eat cereal. It’s probably better for everyone that way.

The “It’s Your Fault I Screwed Up” Review

This is a review for a high end restaurant in Providence.  The restaurant boasts of wall to wall 5 star reviews.  Except this one from Wenyi.  Apparently, Wenyi thinks it’s the restaurant’s fault that she failed to check the price on what she bought, before she bought it. Here’s a pro-tip Wenyi: If the price of your food is so important that you are willing to trash a restaurant’s reputation with a one star review on the web, then perhaps it should be important enough for you to ask about in the first place.  You even acknowledge the fact that you made assumptions and it was your responsibility to ask the question.  Yet, you feel “robbed” because you failed to do so. You weren’t robbed, you weren’t lied to, and you weren’t mislead.  You made an assumption and that assumption was wrong. That’s on you, not them. 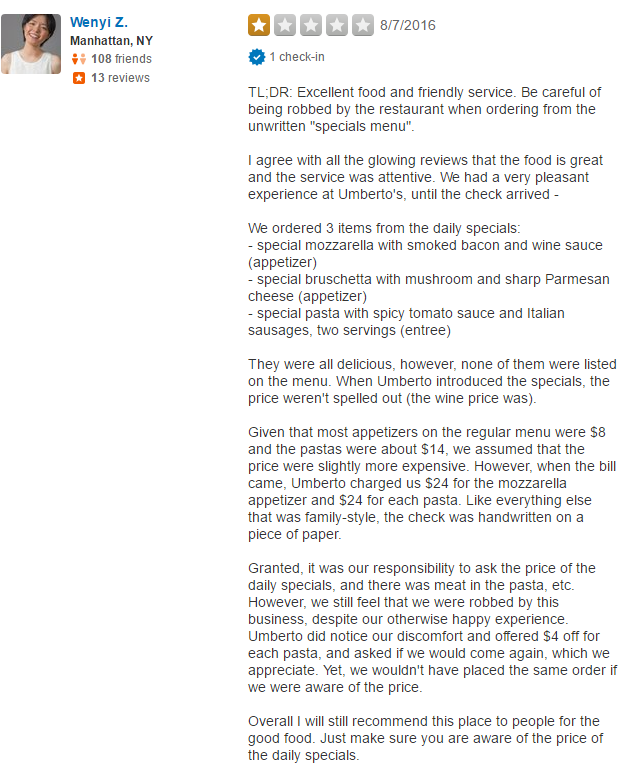 The “I Dreamed of Being a Professional Food Critic, But Instead, I’m Just a Yelper” Review

Look, Yelp is great. I use it all the time and the vast majority of reviews are really helpful.  But let’s not take ourselves too seriously, OK?  It’s Yelp, not the New York Times food section. Nobody wants to read a bunch of self important, narcissistic, drivel.  Was it “nummy nummy in your tummy”?  Great!  Say so.  Was it “kinda meh”? Great!  Say so. Don’t try to make it into something it’s not.

Let’s dissect an excellent example of this phenomenon, provided by a guy named Michael. 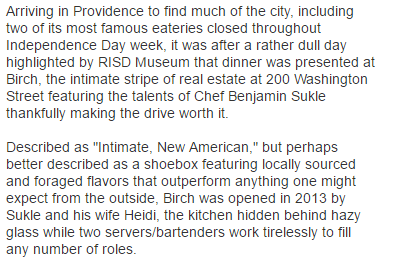 Ok, Mikey, let me stop you there.  First off, no one cares that you went to the RISD museum (“Rhode Island School of Design” for you plebes who are not quite as “in the know” as hipster Mikey here). We care that you are trying too hard to seem ‘cultured,’ but that’s different.  Second, you do realize you can put more than one sentence in a paragraph, right? Third, have you heard the term “bloviating”? 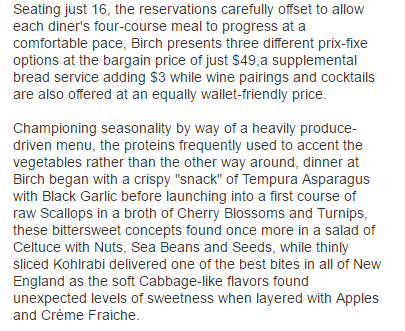 Dude.  This may be the greatest collection of passive voice/run-on sentences the world has ever seen. So. Many. Words.

Mikey, don’t take this the wrong way, but I have read this at least 12 times and I still have no clue what the hell you’re talking about.

Bottom line: Stop trying so hard to sound impressive and just write like a normal person.

Finally, my personal favorite, a girl so angry, so critical, so entitled, and so positively batshit crazy, I have an entire file on my computer dedicated to her and she gets her own subsection in this post. Everyone, let’s say hi to “Crazy Kristen”!!  I was first introduced to this Queen of Mean when I saw a VERY pointed negative review on an otherwise popular restaurant’s feed: 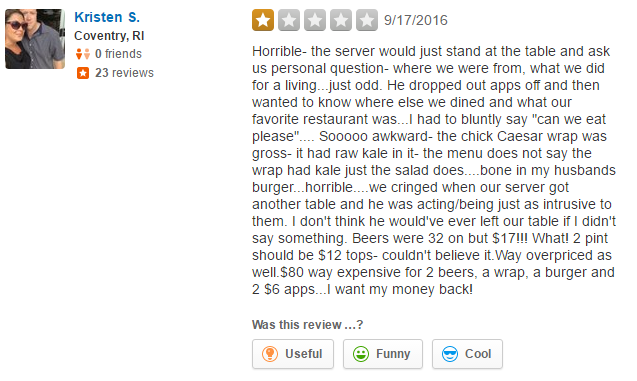 After reading this, I said to myself “Self, maybe this waiter really did wear out his welcome and make these folks uncomfortable… there are plenty of people who don’t always recognize non-verbal social cues… Maybe there was some validity to her complaint.  But, I dunno. Maybe he was just trying to be friendly and have a nice conversation. What’s so terrible about that? I mean, he asked them where they were from, not what kind of birth control they used… Hmmmmmmm…….”

How to tell? Let’s click on Kristen’s name and take a look at her reviews of some other restaurants….and prepare for the cascade of crazy that’s coming your way in 3….2….1…..

You starting to see a trend here?  I mean, I’m certainly not one to jump to conclusions, but….. Let’s keep going….

Really, Kristen?  Was it really the most disappointing in a “lonnnnggggg” time or just a “lonngg” time?  Cuz I kinda feel like you’re disappointed an awful lot.  In fact, it seems to be your calling card.

Moving on….. Remember how she didn’t like the waiter who was too chatty?  Well, she also doesn’t like waiters who aren’t chatty enough:

I know… it’s hard to keep track of all the things she doesn’t like. Luckily, she does her best to complain about anything and everything, all day, every day, to anyone who will listen, so I guess you can just kind of assume that whatever it is, she doesn’t like it.

I’m sure management is regretting that you didn’t “alert” them too, Kristen….. I’m sure those folks just LOOOOOOOOVE to hear from people like you.

Or, perhaps, as the next review shows, they can see crazy from ten miles away and know when not to engage…. 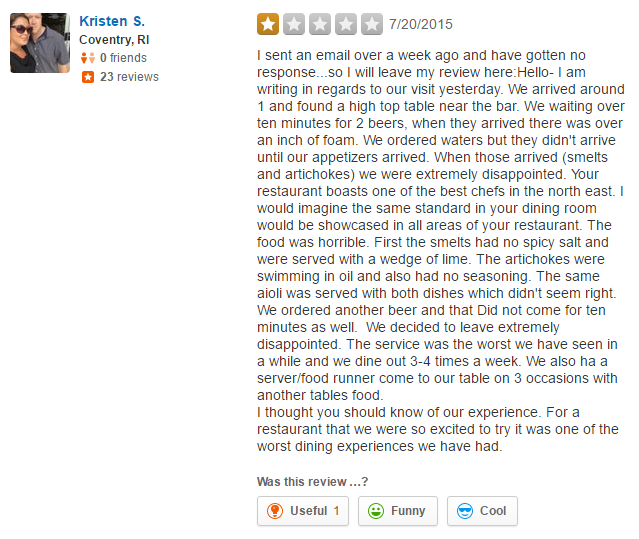 Finally, here’s a real standout from Kristen, which, let’s be honest, is pretty impressive given the rest of her contributions. It was for a restaurant at Disney World, of all places. 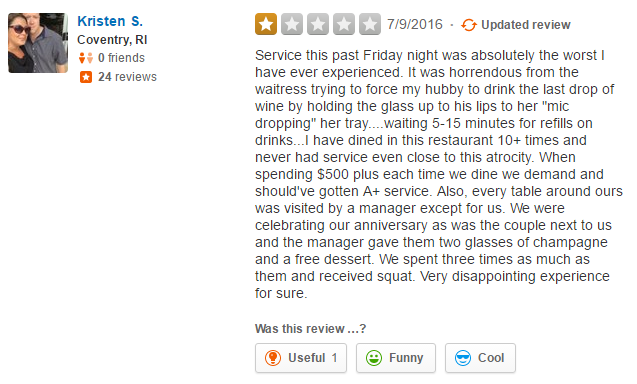 First, I’m pretty sure the waitress didn’t waterboard your husband with his wine. Now, maybe your husband tried to waterboard himself with his wine. After spending 30 minutes reading your toxic Yelp reviews, I can certainly see the motivation for your likely poor, put-upon, spouse to try to end his own tragic suffering, but I am super positive that employees of ‘The Happiest Place on Earth’ are not routinely assaulting customers with their wine glasses. Second, how does one “mic drop” a tray?  I don’t even know what that means, but it sounds pretty awesome and like something I should be doing a lot more often. Third, I am 100% sure that you have no idea what another table paid for their meal, so stop lying. Finally, perhaps every other table got a visit from management because the customers at those other tables were kind and considerate and treated their servers with respect, instead of acting like entitled assholes who desperately need to learn that the world does not, in fact, revolve around them.

And that, friends, concludes this edition of “Hey Internet, What the fuck is wrong with you?”  For better or worse, I have a LOT more material to work with. In fact, this may become a recurring feature on this blog.  Because sadly, the jokes just seem to write themselves….

Thor: Master of the art of subtle persuasion.

Beautiful views and excellent wines are a given on

One of the cool and ever changing rock formations

There’s lots of interesting stuff to see in Deat

One last photo from our four month stay in San Die

We like a hike with a good payoff at the end, and