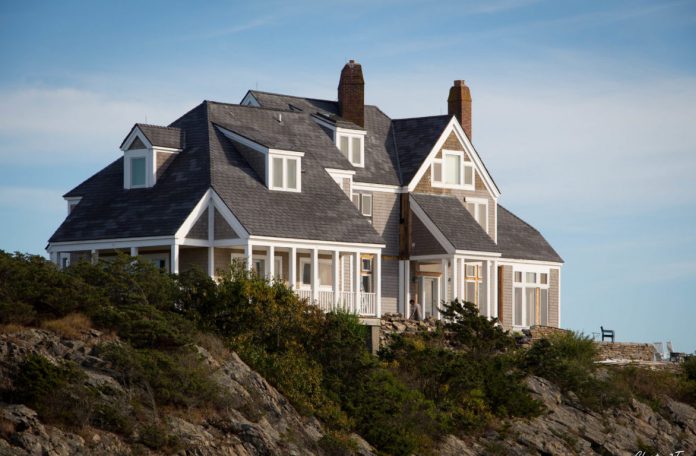 After several failed attempts, due to uncooperative weather and conflicts with my physical therapy schedule, we finally made our way to Newport, Rhode Island last week. Given the pristine October sunshine, we decided to drive along the main road that encircles much of the seaside town, stopping when necessary to gawk at the massive homes and beautiful views, before heading into town for drinks and snackery.

Newport is known for its enormous historic waterfront mansions, many of which are now museums. The most famous is called “The Breakers.” It was built between 1893 and 1895 by members of the Vanderbilt family – who apparently had a small quantity of disposable cash to build with.

I mean, really… Could we try to be a little less pretentious? Who names their house? 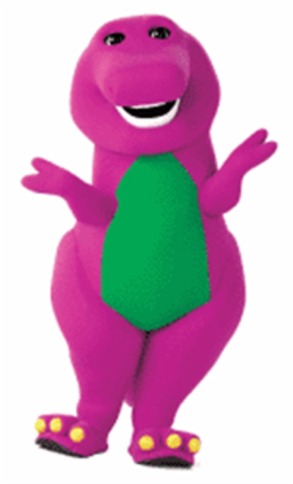 Anyway, we didn’t visit these museum/mansions because they’re not exactly “crutch-friendly.” But if you like obscene displays of wealth, you can tour several of them.

Alternatively, you can do what we did and drive around town shamlelessly gawking at and photographing the privately owned mansions. On the one hand, I felt kinda bad taking pictures of people’s houses. On the other hand, I figure, if you’re that worried about keeping a low profile, you don’t buy a 30,000 square foot house in the middle of well known tourist area. It’s like celebrities choosing to dine at famous restaurants in Beverly Hills and then complaining that they can’t eat dinner without the paparazzi hounding them. If they showed up at Bennigans in Poughkeepsie, they’d have zero problems.

Anyway, as you can see, the privately owned houses are basically shacks compared to the historic mansions.  I don’t even know why these people bother. 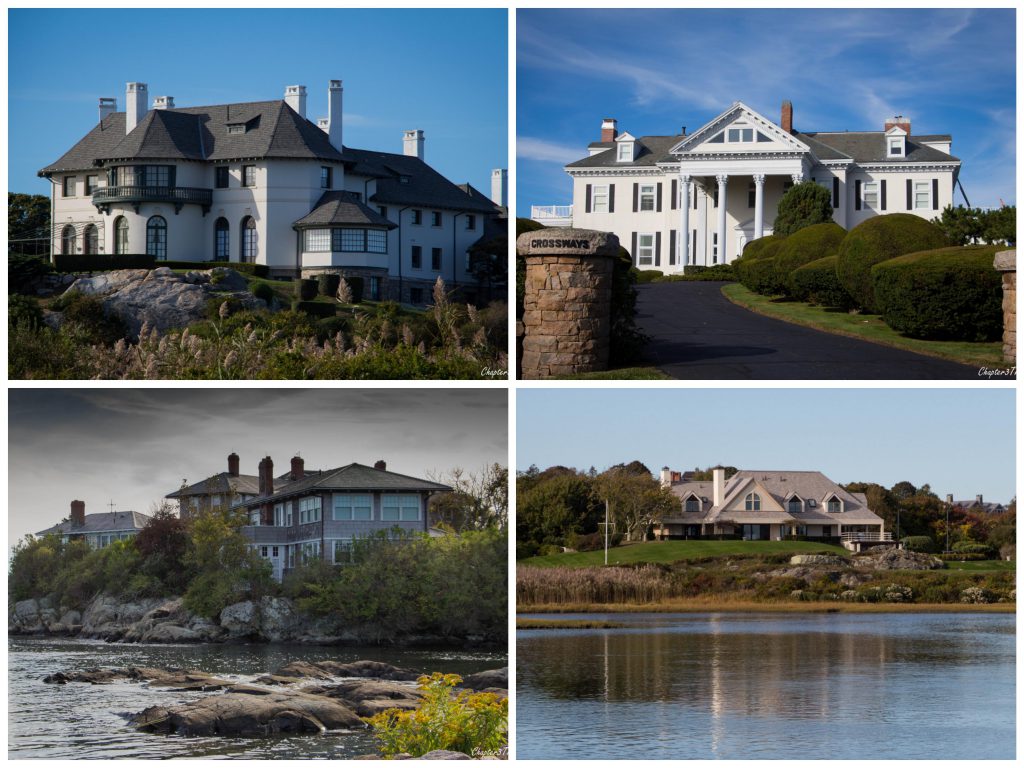 Even though it was comparatively tiny, we did have a favorite… it’s the same one as the main photo for this post. I’m sure it’s super affordable. 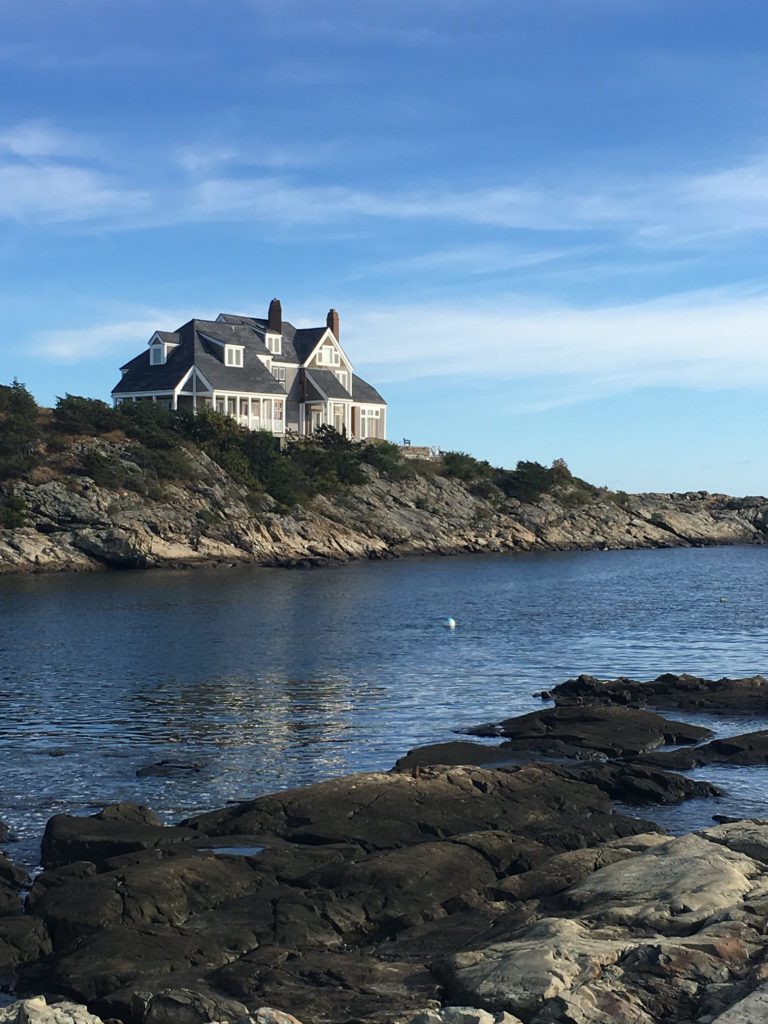 Along with gawking at the houses, we pulled off several times to take in the gorgeous New England coastline and beautiful sailboats. 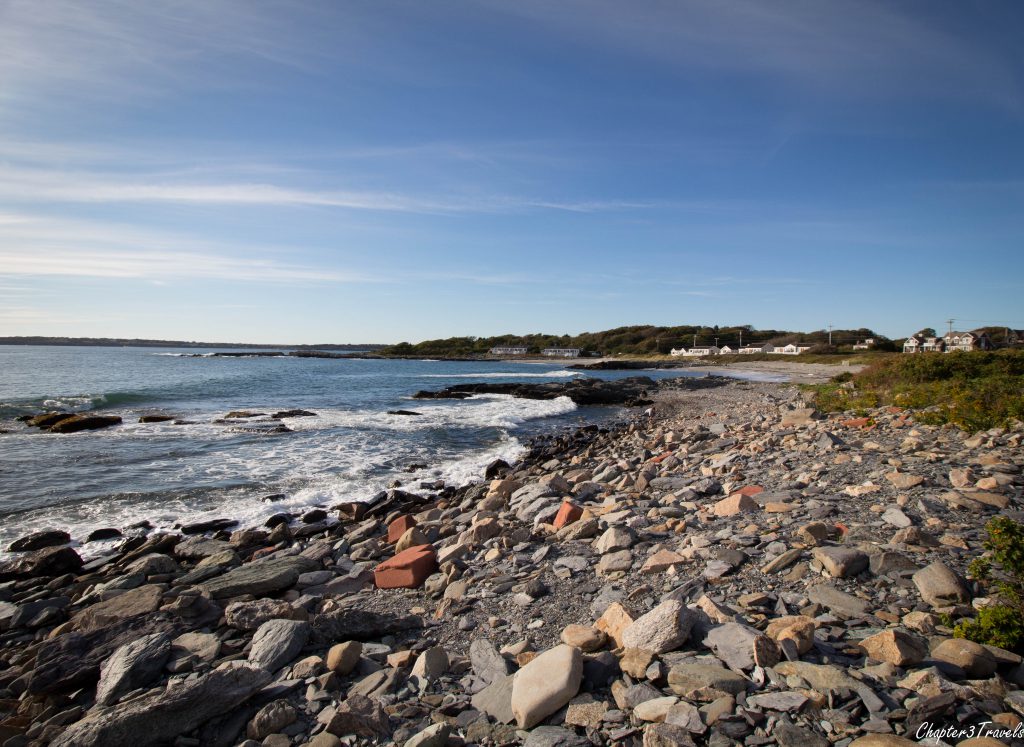 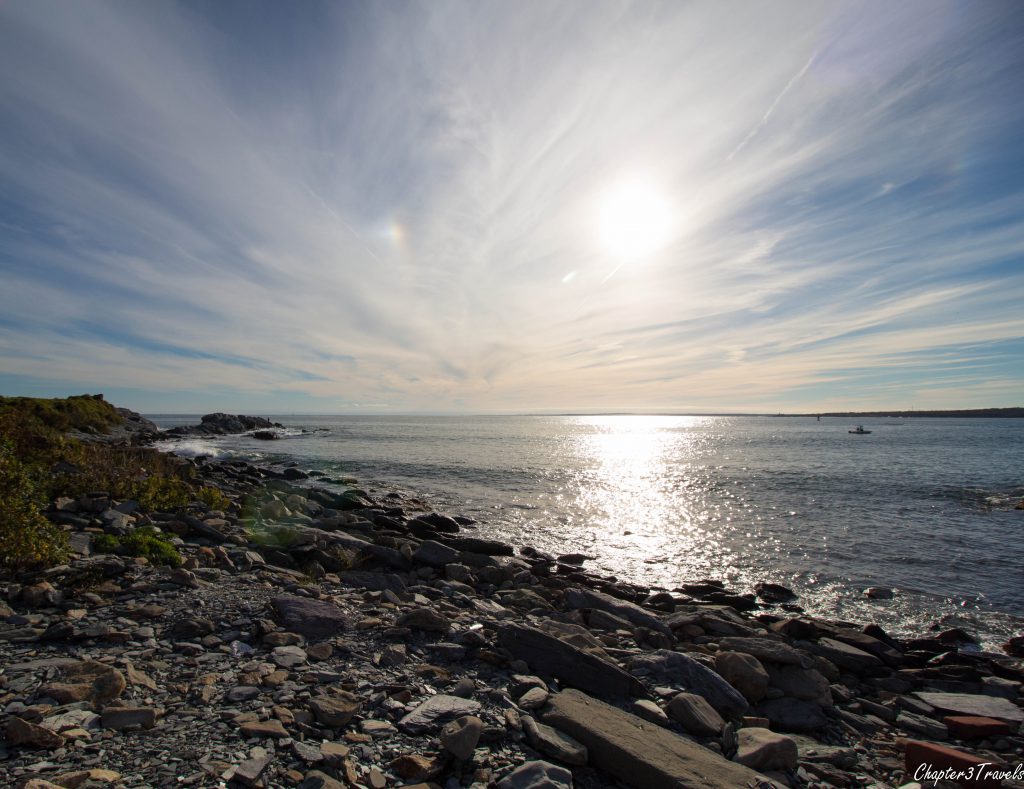 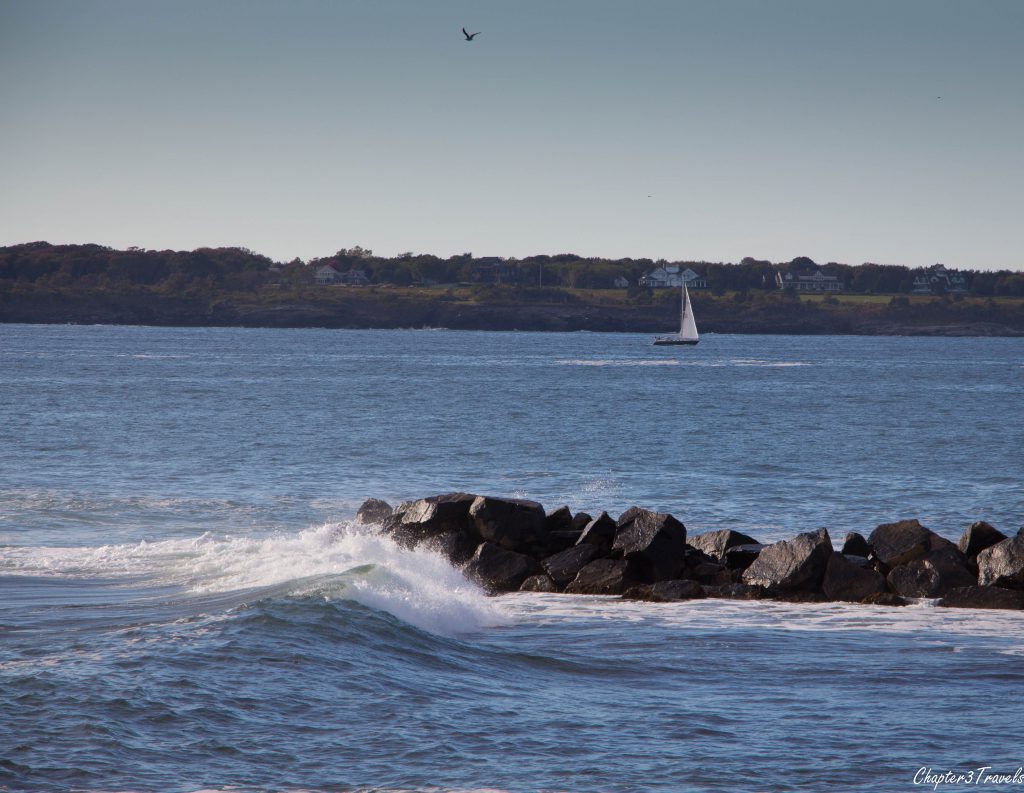 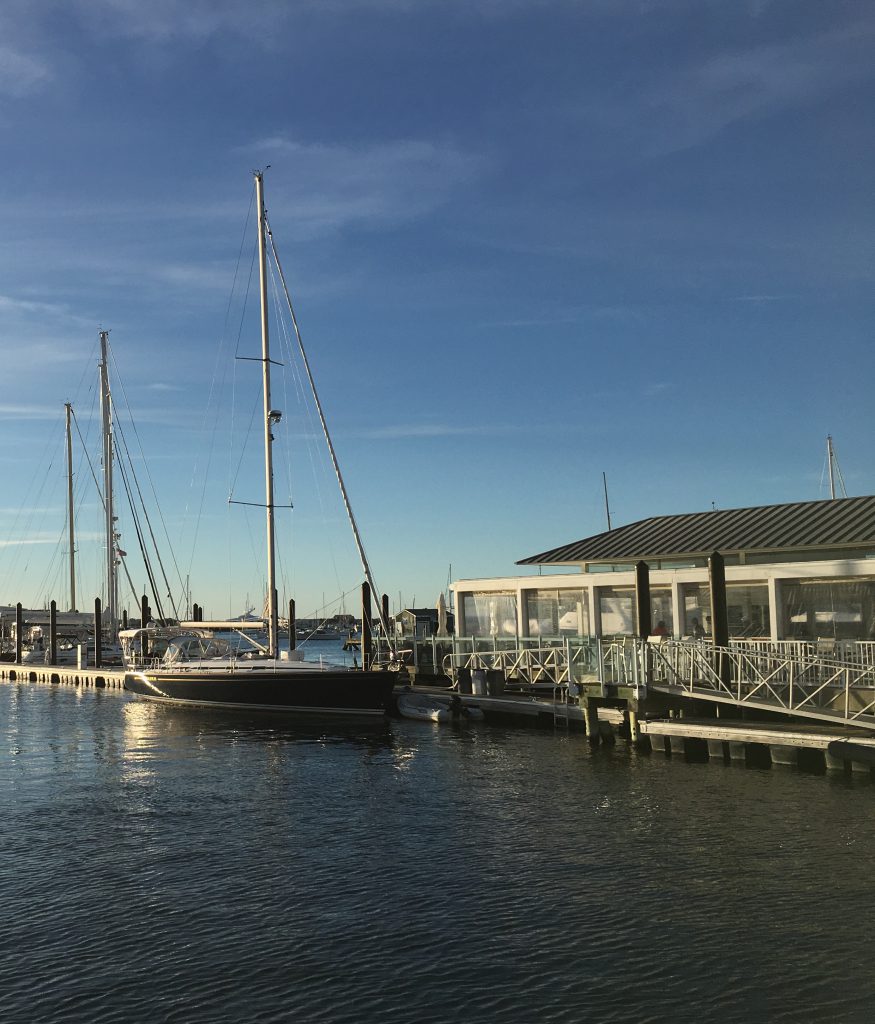 As we made our way around the island, we stopped at Brenton Point State Park, which is on the southern tip of the island, and Fort Adams State Park, which is a bit farther northwest. Both offer stunning views of the ocean. If you visit Fort Adams, you can tour the original fort with a guide. It’s something we’d like to do once I’m 100%. In the meantime, we got a good tip from my high school friend about a place within the park that has great views of the Newport Bridge. 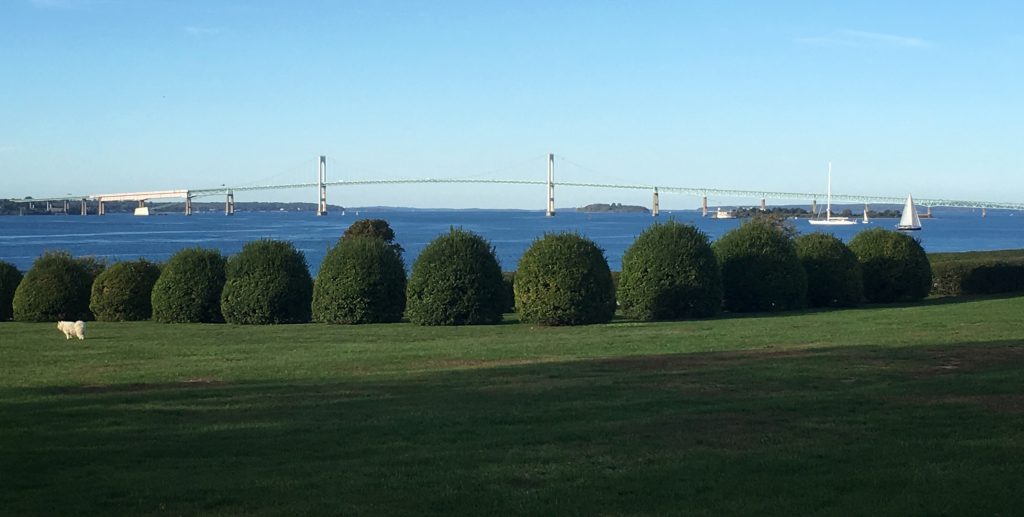 While standing closer to the water’s edge, looking across the channel, we noticed this house built on a rock.

We later learned it’s called “Clingstone” (get it??) and it was built in 1905 by a guy who’d lost his land to the government when the powers-that-be decided to enlarge a nearby military fort. He was a little annoyed, to put it mildly, and declared that he would build his next house where no one could bother him. Not one to exaggerate, he built this epic house on a rock in the middle of the water, and it has stood there for well over 100 years. In 1961, after it had fallen into disrepair, a private owner purchased it, for a whopping $3600, and renovated it. Here’s a 2008 article about it in the New York Times. And here’s a video on youtube about the house and its renovation.

After our scenic drive, we headed to the main commercial district where all the restaurants, bars and shops are located.  It was just about sunset so we found an outdoor bar area (populated entirely by drunk retiree boaters) and made ourselves at home for a drink while the sun set. We then wandered back toward the main commercial strip for cocktails and snacks.

Of course, we weren’t really all that hungry because, as we continue our quest to find the best fried clams in New England, we’d stopped at  Flo’s Clamshack on the way into town.  Flo’s is located in Middletown, which is right next door to Newport, and came highly recommended by my brother, who knows all things New England seafood.

As for “the great clam question” of 2016, with 2% of precincts reporting, Flo’s is officially in the lead!!

Newport has a ton of interesting things to see and do and we have a long list ready to go, as soon as I’m off the crutches. For the time being though, it was the perfect place for a quick sightseeing trip on a beautiful fall day in New England.

I don’t care if there’s a pandemic and everyth

According to our plans, we were supposed to be in

I wasn’t sure is #signselfie was a thing or not,

After several failed attempts, we finally made it

Portland, inundated with smoke from nearby wildfir

We spent a perfect afternoon hiking the Skyline Tr